In a world that is in a digital transition, with a demand for young new structural engineers who are skilled to work with software, it is important not to forget the old guard. In ’my first structural design’, an old hand in the built environment is questioned about his/her experiences. There is plenty to learn from this old guard. In this first edition of my first SD: Hans Laagland. 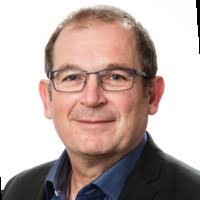 What was the first project you were involved in?
My first project was the VROM-building in The Hague (Figure 1), I worked on this during my internship at ABT in 1988. Of course, the modeling software that we now know did not exist at the time. I then worked with Casio FX850P calculators (Figure 2), which you could program. This made it possible, for example, to have an m-κ diagram calculated. That was very progressive at the time. The output of the calculation was printed on a narrow paper strip, which was then pasted into the hand written calculations of the structure.

You saw in this emerging time of digital resources that many engineers were programming their own digital tools. The result was a proliferation of calculation software that had not been verified, so the use and results were not always clear. In addition, everyone used their own system and nothing was compatible. We had a few computers in the office for a group of designers with which digital drawings could be made.

What was your first project as the main responsible person?
After my military service and some wanderings, I started working at Witteveen+Bos. In the first instance I would be responsible for the construction of the new building for a waste incinerator in The Hague. However, after two weeks it became clear that the project would not be realized for political reasons. 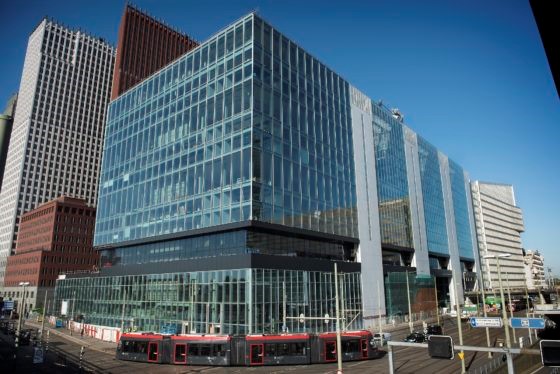 Figure 1: VROM-building in The Hague

What did it feel like to be responsible as a starting engineer?
You will find out during work. The University of Applied Sciences in Deventer is 25,000 square meters and consists of 7 layers, good for 6,000 students. Apart from the large dimensions, the client wanted a completely prefabricated building that was sustainable, variable in lay-out and demountable. Such constraints were pretty ambitious for the time. I felt the responsibility especially when the contractor started building. He builds what you have come up with! How that felt is hard to describe, for me it was an exciting time. I realized very well that you are designing a building that will be used by people, people who assume that they work in a safe building. Because as a starting structural engineer you still have a limited frame of reference and everything is new, it was all quite exciting. I still regularly drive past the building and am still proud of the result.

How did your education fit into work practice?
I did my structural (engineering) education at the Hoge Technische School in Hengelo (now Saxion Enschede). After that, I attended the steel and concrete structures course at the Hoger Technisch Instituut in Amsterdam and then the Beton Vereniging course. The courses of the past were much more technical where now the balance has shifted more to management and organizational skills. I thought the transition from school desks to work was wonderful, I could not wait to put into practice what I had learned. Still it was quite difficult and I found out that a lot had to be learned. On my first day at work I was presented with an architectural drawing of a factory hall with offices, with the message: "find this out". I had no idea where to start. To top it all off, the contractor called me the next day asking if it was already done, and he kept calling every day.

What is the difference between the older projects and the projects of today?
The buildings have become more complex: higher demands are placed on a building, the use of materials is more diverse and the form is often more complex. This also makes the organization of a project more complex. Where you used to do a whole job with a small team with a fixed composition, you now see that larger teams are involved in a project that differ per phase of a project and/or are adjusted. There are many more specialisms involved in a structure these days.

What advice do you give to young structural engineers?
A starting engineer at an engineering firm should especially look around; what are your colleagues doing and how do they do it. Make sure you can collaborate with an experienced engineer, he can teach you the tricks of the trade. Make sure you understand how a structure works and why it behaves in a certain way. Calculating a structure is important, but not the most important. With a calculation you can only prove that your design falls within a certain frameworks, no design follows from your calculation. So do not start modeling your work, but design it. Use simple hand calculations and rules of thumb to first design the structure, do this before you ‘knock in‘ the building in a calculation package. Be stubborn. You come in with knowledge of the latest developments in your field. Ask yourself why people work in a certain way and whether this cannot be done differently/better/More easily. I am not just talking about the calculations, but especially about how a building is constructed and which materials, construction method and tools are used.