‘De Hoge Regentesse’ is a medium high-rise building located in The Hague in The Netherlands. It consists of a tower with 24 building layers, consisting of 128 apartments, a ground level of commercial areas, and an adjoining building with parking spaces. In total, the building height is up to 70 meters. Due to the chosen building system, it was managed to construct up to one level in three days. The total structure was built within 100 days. Especially in an urban area, with a small construction site and the need of limited nuisance to the neighborhood, a shorter construction time lowers the burden on social environment and failure costs.

To construct ‘De Hoge Regentesse’, Wijcon chose a structural building system that combined traditional with a prefab construction method. Due to the interaction between forces, it was not possible to construct the first three floors with prefabricated elements. From the fourth floor, the layers were suitable for the use of prefab elements, and therefore the structural system was manufactured prefabricated. Wijcon, the engineering company of Van Wijnen, made this decision because of the repetitive floors in this project. In addition, prefabrication of structures influences construction time in a positive way. On the other hand, the challenge of a prefabricated structure lays in the alignment and coordination of different elements. The prefabricated elements, which are produced by different suppliers, such as floors, facades, and inner walls require a high quality and well-coordinated engineering. For this project, Wijcon was responsible for the main engineering of the building, as well as the detailed engineering of prefabricated
elements. As the main engineer, Wijcon was responsible for the stability of the structure and for providing calculations that determine the amount of reinforcement for the elements that are poured in-situ concrete. Another responsibility was making the essential structural design decisions in the early phase of building development. Due to the experience of Wijcon, in the combined and integral role of main constructor and detail engineer, as well as the involvement in the design phase, requirements for a prefabricated structure were already taken into account. This lead, for example, to the detail presented in Figure 1, which shows the connection between the inner wall, the load bearing facade, and floor. In this detail, multiple elements have to fit together, which is only manageable with expertise in prefabricated structures and with a fluid cooperation between the involved companies.

Eventually, the choice of Wijcon to combine prefabricated structures, to be involved in the design phase, and have the integral role in engineering resulted in a reduced building time, failure costs, and probably most important, a limited burden on social environment. 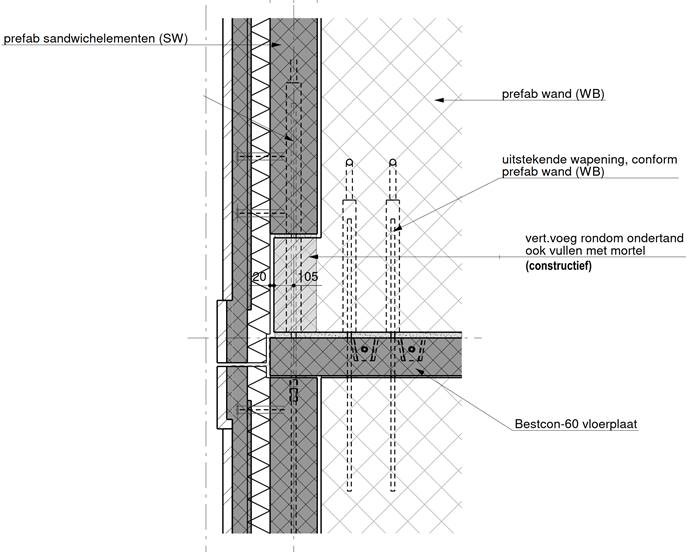