The ‘Bunker’ is an understanding of anyone who studied in Eindhoven, from the former students till the student associations that were housed upon 2016: many (former) students have memories of this striking location. In 2015, architect Powerhouse Company with IMd won the assignment to bring new life into the Bunker. The building is outdated and in poor condition, however, it is also a building with monumental value on a valuable location in the city.

The current Bunker
Love it or hate it, the Bunker designed by Maaskant is one of the most iconic brutalist buildings of the modern Dutch architecture, which is why it should not be demolished, see Figure 1. Powerhouse Company designed a plan in which the Bunker becomes part of the TU/e Campus. On the former parking lot, a city park will be made and the roof of the Bunker will be covered with plants to connect it with the TU/e Campus. In order to achieve this ambitious plan, functions must be added, which resulted in the development of the tower. 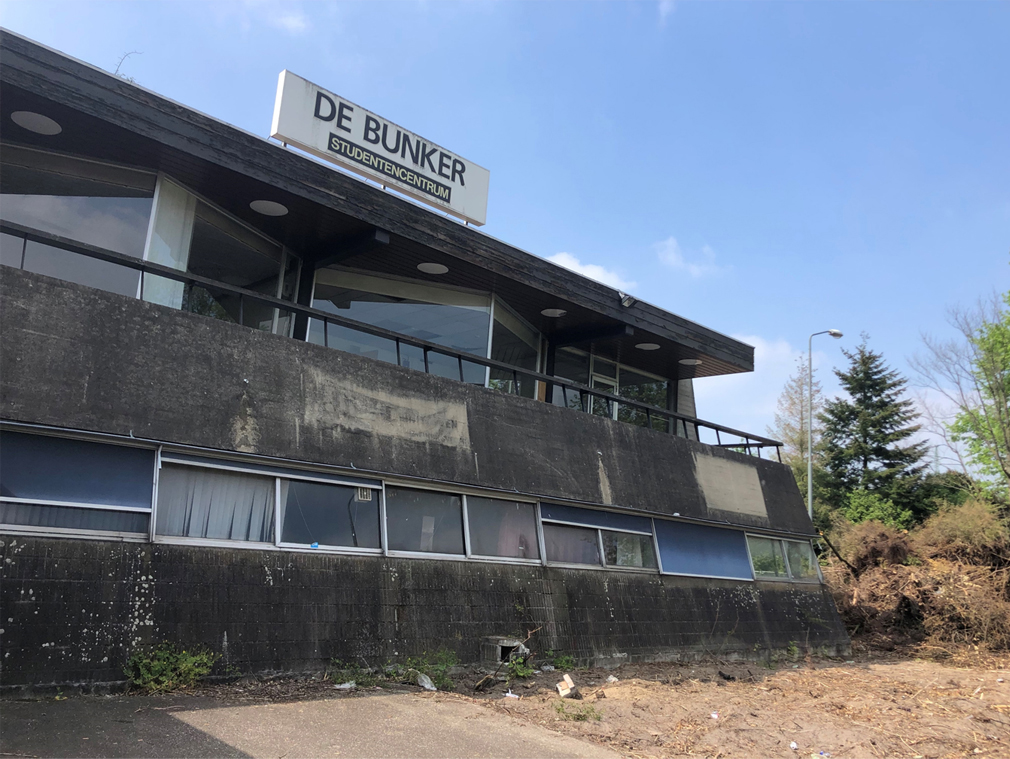 Even though the name suggests otherwise, a slender structure is made consisting of a steel frame work and thin load bearing facades. The characteristic elements of the building are preserved, resulting in an as much as possible (architecturally) unchanged facade, see Figure 2. In order to make room for the tower, the facade above the Demos entrance was sawn in 10 parts and stored. These parts will be put back next year to ensure that the round windows above the entrance will return in the new design.

Through the years, quite a few internal renovations have taken place, which makes the logic behind the structure rather difficult to trace. It is especially difficult due to the fact that there is no structural archive, and therefore each adjustment to the existing structure must be investigated in situ. This results in an intensive cooperation between IMd, Power House Company, and the contractor Van Wijnen.

The new building
The new residential tower of the Bunker is situated inside the current Bunker, of which the two side wings and the strip on the John F. Kennedylaan are preserved. The new parking garage is mainly located on the current square on the Bisschopsmolen. The residential tower has a height of approximately 100 meters and has 32 floors in addition to the ground floor and the roof. The ‘Bunker’ is an understanding of anyone who studied in Eindhoven, from the former students till the student associations that were housed upon 2016: many (former) students have memories of this striking location. In 2015, architect Powerhouse Company with IMd won the assignment to bring new life into the Bunker. The building is outdated and in poor condition, however, it is also a building with monumental value on a valuable location in the city.

The structure consists of load bearing partitioning walls (350 to 400 millimeter thick on 1st to 4th floor and 250 millimeter thick from the 5th floor and higher). The floors have different spans, of which the largest span equals 9 meters. Due to the relatively light weight facade and the opportunity to make a fixed connection between the concrete floor and the concrete walls, the thickness of the floor can be minimalized to 280 millimeters. This was also necessary because of the maximum permitted building height.

The residential tower has, under the 3rd floor, a basic floor area with a varying width of 42 to 48 meters and depth of 20 to 30 meters. Above this floor up to and including the 9th floor, the residential tower rejuvenates step by step till a basic floor area of a constant width of 35 meters and a variating depth of 17 to 25 meters is reached. The stability in transverse direction of the tower is ensured by the partitioning walls and in the longitudinal direction through the core of the structure (with elevators and stairwells). The longitudinal walls of the core have been extended with a grid length of 7.5 meters to ensure additional stiffness. The construction site for the new basement is realized with the so-called Soilmix walls, which temporarily take care of the ground and water retaining. These Soilmix walls are formed in the ground that consist of a mixture of ground with water and cement in which steel beams are applied for reinforcement. These ground and water retaining walls must be horizontally supported at the top through grout anchors and a propping frame. The foundation of the residential tower and the parking garage is made with Fundex piles with grout injection and have different shaft diameters of 460 to 540 millimeters and point diameters of 560 to 660 millimeters.