Ductility is an essential aspect of designing safe and reliable structures and defines to what extent a structure can plastically deform until it collapses. The ductility depends on the geometry and material properties. The essential material properties include the ultimate strength to 0.2% proof stress ratio (fu/f0.2) and the strain at rupture. The ratio fu/f0.2 is relatively low for many heat-treated alloys. This thesis considers the influence of this ratio on the ductility at the structure level for aluminum alloys.

When welds are applied at heat-treated aluminum alloy members, the mechanical properties in a zone around the weld are affected by the heat input of welding. The material inside this Heat-Affected Zone (HAZ), tends to lose its strengthening effects obtained by previous heat treatments. This affection results in degrading strength properties and is usually associated with a higher fu/f0.2 ratio as compared to the base material, and hence, it may positively affect the ductility of a structure. On the other hand, the extent of the HAZ is relatively small as compared to the structural dimensions. Since the HAZ has lower strength than the base material, the extent of the plastic zone may be limited, resulting in a relatively brittle performance at the structural level. Currently, proper guidelines are present in the available standards related to the strength of aluminum alloy connections. However, clear guidelines regarding ductility performance are lacking. A literature review and an experimental study were performed to investigate the effect of welding on the ductility performance. Furthermore, a foundation has been created for a numerical model to easy and quickly examine the influence of welding on several aluminum alloy connections.

The outcome of the literature study show that welding of heat-treated aluminum alloys will result in poor ductility performance when a transverse weld is applied in the tensile zone of a member. Therefore, several studies recommend avoiding transverse welds in tensile zones where possible. In the field of ductility of longitudinally welded members, extensive studies are still limited.

Figure 1: Schematizations of the different specimens 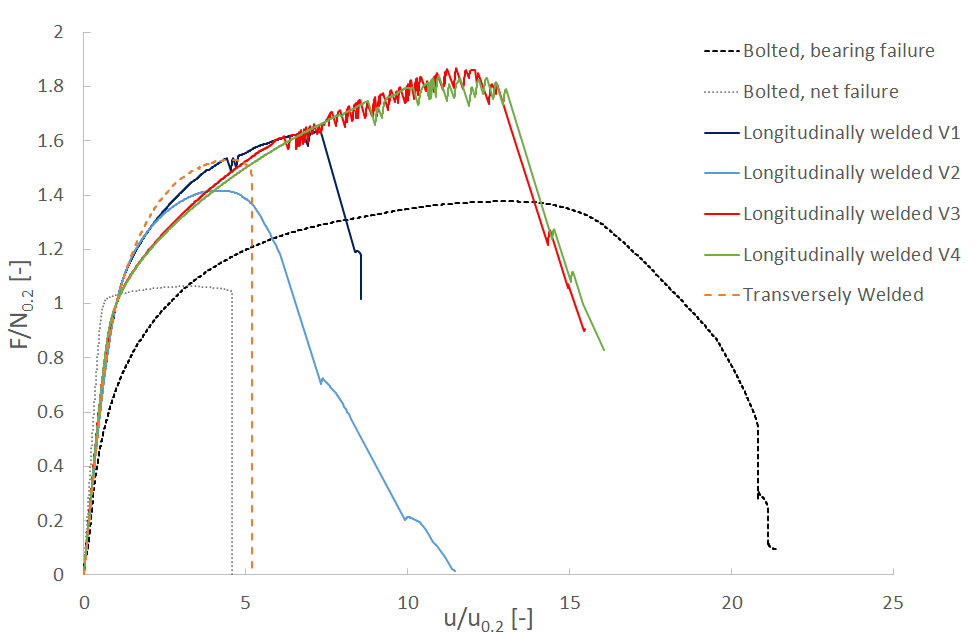 In Figure 2, a normalized load-displacement plot of the experimental results is shown, where the results are normalized by the elastic limit load and the corresponding elastic limit deformations. The results of the experiments show that transverse welds indeed failed by minimal normalized deformation for a heat-treated aluminum alloy 6082T6. Furthermore, the longitudinally welded cruciform variant 2, with a limited member width, showed relatively small deformations up to failure. In both cases, the critical cross-section was fully heat-affected. The longitudinally welded cruciform variant 1 contained a larger member width and hence a partly heat-affected zone. For this variant, a better ductility performance is experienced by larger deformations. The welded cruciforms variant 3 and 4 resulted in the best ductility performance. These variants were dimensioned based on failure in a plate consisted out of a cold worked aluminum alloy 5083H111, and were therefore not affected by welding. The bolted experiment results show that net section failure leads to an expected poor ductility performance. The deformation capacity values of the fully heat-affected members were in the range of this poorly engineered bolted variant. The bolted variant which failed by bearing showed the best ductility performance of all tested connections. That this variant showed the best performance was also noticed from the pictures of the failed specimens. A picture of the bolted specimen failed by bearing and the failed longitudinally welded specimen is shown in Figure 3.

From this research, it is concluded that when a member is heat-affected over the full critical cross-section, it will result in relatively low ductility performance of the structure. This applies to both transversely welded and longitudinally welded connections. Furthermore, it is concluded that the changed ratio fu/f0.2 did not lead to a positive effect on the overall ductility performance. It is experienced that the extent of the zone of changed material properties had a more significant impact on ductility performance than the material properties themselves. Finally, it is shown that a low fu/f0.2  ratio close to 1.0 did not lead to early failure by a possible inability of stress concentrations redistribution in a bolted joint suffering from bearing failure.
Since transversely welded members contain a fully heat-affected critical cross-section, it is recommended to avoid transverse welds in heat-treated aluminum alloys where possible. For longitudinally welded members, it is recommended to apply a member width larger than the extent of the HAZ in order to ensure not the entire cross-section is heat-affected. In this case, a larger ductility performance will be achieved. Furthermore, it is recommended to ensure that failure will occur in a cold worked or fully annealed finger plate. Since this plate is not affected by welding and usually contains a high fu/f0.2 ratio, significant plastic deformation can occur before failure. For bolted connections using an aluminum alloy with a very low fu/f0.2 ratio close to 1.0, it must be guaranteed that bearing failure occurs before net section failure occurs. This is important since net section failure will result in minimal plastic deformation.