Exactly 500 years after Vasco da Gama set foot on land in India, the World Expo ’98 that was held in Lisbon opened. With its theme “The Oceans, a Heritage for the Future”, the Expo commemorates the discoveries of Vasco da Gama. One of the most iconic pavilions in history, the Portuguese National Pavilion, must of course be included in this edition.

When starting the design in 1994, the importance of the interaction between the harbor and the pavilion was a key feature. Alvaro Siza, at that time Portugal’s most renowned modern architect, was selected to design the Expo’s entrance as a grand architectural landmark. Architect Eduardo Sousa de Moura and structural engineer Cecil Balmond completed the design team.

Building
Very early in the design process, the decision was made to completely separate the main needs – housing and national character - of the pavilion, which resulted in having a building and a canopy. Figure 1 shows the complete building. At the North side, a three-storey building encloses the main exhibition spaces of the pavilion. The building covers an area of about 55 x 90 square meter, with an average height of 12 meters. A palace-like first floor is created by differing the height of the two storeys (4 meters ground floor, 5.5 meters first floor) and arranging the rooms around a rectangular courtyard. This feeling is further emphasized by the window size and regular rhythm.

Figure 1: Complete Pavilion
In addition to creating a stately appearance, the windows and the central courtyard were designed to adapt to future renovation needs by providing sufficient daylight in the relatively deep building. The major adaption to future needs consists of basing the structural grid on a 7 x 5 square meter module. The main floors were divided into two L-shaped sections: the Eastern side comprised the exhibition areas, the Western side consisted of VIP rooms and complementary functions for the pavilion. The structural system of the three-storey building consists of a raft foundation over concrete piles, surrounded by peripheral concrete retaining walls. The concrete basement columns support the solid concrete ground floor. From the ground floor up, the peripheral concrete walls are continued to provide stability against wind and earthquake loads. The peripheral walls are infilled with a steel frame with composite steel and lightweight concrete slabs, to allow for future rearrangements of the area.

Canopy
The ceremonial plaza is covered by an enormous hanging roof of reinforced concrete. The roof is formed by a catenary arch of steel cables, hanging between two porticoes, and loaded by a skin of prestressed concrete. Besides giving the canopy an elegant and clean texture, the painted concrete also prevents the roof from being lifted by wind suction. While the canopy spans an area of 65 x 58 square meters, the thickness of the concrete slab is only 200 millimeters.
Each portico is supported by its own raft foundation of concrete piles, connected to each other by struts. From the foundation a colossal concrete volume rises, which consists of nine massive columns, arranged in a rhythmic, but provocatively asymmetric manner, shown in Figure 2. Even though the porticoes play an essential role in the structure, the simplicity of detailing has led to an orthogonal and not at all expressive design. 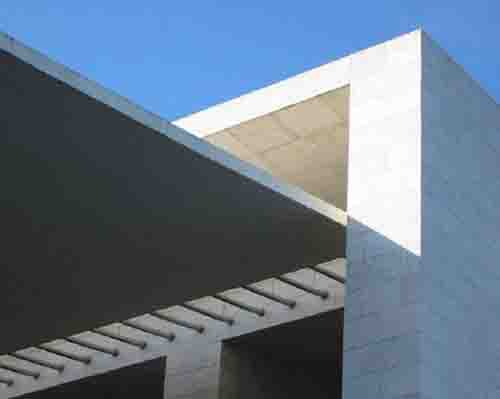 Figure 2: Connection concrete - portico
The simplicity would have been compromised if the common procedure of tapering buttress walls with respect to the bending moment line was applied. Moreover, the massive porticoes actually emphasize the thinness of the canopy. The connection between the porticoes and the steel cables emphasizes the simplicity in detailing even more. At the location where the steel cables are anchored in the concrete, the steel appears to be simply poured into the concrete, which can be seen in Figure 3. However, to allow for prestressing after installation, the concrete slab is hanging from prestressed tendons, anchored into slabs on top of the reinforced porticoes. At each end of the canopy, a gap between the supporting structure and the concrete of the canopy is created. This enables perfect control of its behavior and isolates the canopy from eventually induced earthquake vibrations. Moreover, the thinness of the canopy is emphasized by abruptly stopping the concrete and revealing the steel cables that connect the canopy to its support. 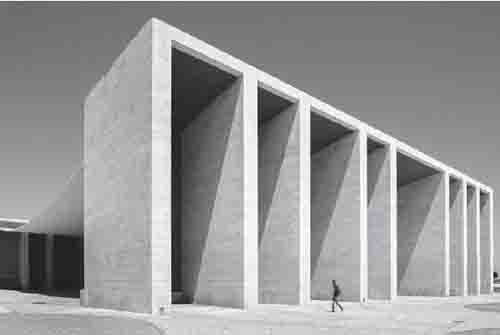 Figure 3: one of the porticoes
The small sag of 3 meters over 65 meter induces immense horizontal thrust at the top of the portico. By using light weight aggregate concrete (LWAC), the horizontal thrust could be reduced while providing sufficient strength and stiffness to distribute the thrust forces. By using concrete with a maximum mass density of 1,850 kg/m3 instead of the usual 2,400 kg/m3, a total weight reduction of approximately 430 tons was achieved. This was essential to provide the 30 centimeter longitudinal slope required for rainwater run-off. An error of 1% in cable force would cause a deviation of 10% in longitudinal shape. Therefore, much attention was put into the posttensioning process. A special study was conducted to achieve the construction of the membrane in only one pour.
More than 3,900 square meter of falsework were used during the operation of pouring concrete. The pouring operation started with a central strip of 2.5 meter, followed by the neighboring strips, simultaneously poured using four pumps and two construction teams. The construction of the concrete took ten hours and was done in one operation.