The Evoluon is one of the most remarkable buildings of Eindhoven. It is usually named as the flying saucer, or in Dutch: ‘de vliegende schotel’. In 1966, the Philips company celebrated that it had been 75 years since they opened their first factory in Eindhoven. Frits Philips imagined a gift to the population of Eindhoven, located on a prime location, at the crossing of three main roads. An esthetical gift, with an educational purpose.

History
The Evoluon was built to provide room for technical exhibitions and is designed by L. Ch. Kalff and L.L.J. de Bever. The first exhibition was designed by James Gardner and showed how mechanization and automation had changed the production process. To be the first in the Netherlands, the Evoluon gave visitors the opportunity to experiment and to control technical machines. Many of school trips went to the exhibitions and one could say that the building became a definition in the neighborhood of Eindhoven. Up to 1989, Philips exposed technical exhibitions in the Evoluon. After that, the site around the dome was being exposed and since 1996, the complex is used as a congress and event center. Recently, there were some rumors about a possible sale of the Evoluon. This carries a lot of weight by real estate developers, but also by the citizens. More than 50 years later, it is obvious that the Evoluon still matters.

Design
The prime requirement of the exhibition hall was that it had to be one great area, so visitors could have a full experience. The design should be striking, futuristic, and characteristic to the city of Eindhoven. The shape of the building is chosen to be circular, so it is visible from each of the three main roads. A dome like a spacecraft suited the subjects of interest at that time and created a connection to the technical exhibition which are held inside. The dome has a span of 77 meters, rests on twelve V-shaped columns, and reaches 29 meters above ground level. Next to the dome, also a 60 meters tall, octagonal radar tower and a service building with a restaurant, a restroom, and a small movie theatre, were present on the building site. In the front, there is a pond with approximately the same diameter as the dome. After the exposure during the nineties, a large building was built in between the dome and the radar tower, to facilitate as an auditorium and a movie theater (Figure 1). 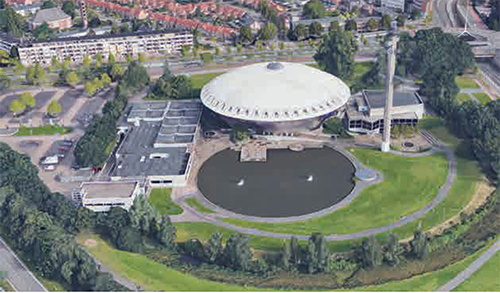 Figure 1: Terrain of the Evoluon

Structure
The structural engineer of the project was prof. dr. ir. H.C. Duyster (9 September 1907 – 26 March 1987), member of the ‘Raad van Bestuur van de Hollandsche Beton Maatschappij N.V.’. In 1966, he wrote an article for Cement, which also has been published in the sixth edition of the KOersief, in November 1983.
The soil qualities of the building site are improved and the basement, constructed in concrete, functions as the foundation. The twelve V-shaped columns support the dome and enclose the glass facade of the reception hall. The dome consist out of the lower part with the three structural rings and the upper part with the hexagonal members (Figure 2). 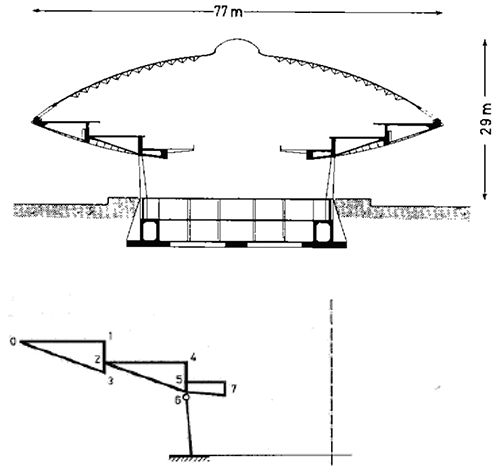 Figure 2: Section of the main building and scheme of the structural rings

The three structural rings are constructed out of three prefabricated, concrete elements, repeated 96 times. Two have a triangular cross-section and one has a rectangular cross-section, as can be seen in the mechanical scheme in Figure 2. The 96 ensembles are held together by steel tension cables of 12 millimeter diameter, each consisting of 5 millimeter diameter wires and a total length of 169 kilometers. The steel cables run through hollow sections in the concrete elements and are prestressed. Due to this prestress, the forces can be distributed through the prefabricated, concrete elements. This can be explained based on the mechanical scheme of Figure 2. When a force is acting at point 0, the element wants to rotate around a point near point 1. This results in tension along the axis 0-1 and compression along the axis 0-3. Due to the pre-tensioning in point 0, point 3 will stay in place and is relieved by the forces. The compression will be distributed through point 2. The distribution of forces in the middle ring, works in the same manner by pretension in point 2. Now, the compression along axis 2-6 are much larger than along axis 0-3. Extra material is needed to compensate the compression. This extra material is added to the axis 2-6 and to the rectangular section 7. The weight of the rectangular section provides equilibrium in point 6. The compression from the ring, pushes the columns inside and hinges are needed to prevent large stresses. The hinges also allow the structure to expand with temperature fluctuations. Also, in the outermost ring (cross-section 0-1-3), additional equipment was placed in order to prevent the stresses to become too high. Special thermal insulation is provided on the prefab concrete elements. In between the 96 repetitions, thermocouples were installed in order to check the temperature fluctuations (Figure 3). 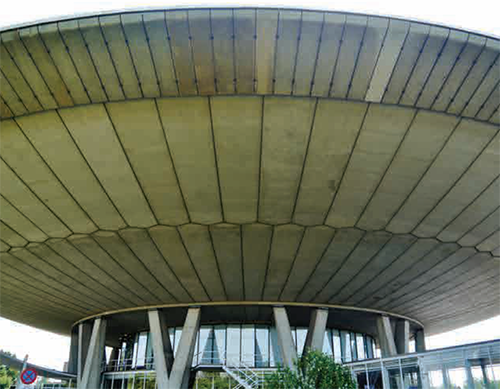 Figure 3: Prefab ring elements including thermocouples in the outer ring

The upper dome is made out of concrete with 48 large openings on the edge, which give the visitors a panoramic view over Eindhoven, and a transparent cupola in the center of the dome with a diameter of 8 meters. The curvature of the dome is relatively flat, so snap-through buckling of the entire dome must be taken into account, because the forces want to flatten the dome. Due to this phenomena, compression and ring tension arise. In order to obtain equilibrium, pre-tensioning is applied at the edges of the upper dome. Next to global buckling, also local buckling needs to be taken into account, due to the in-plane compression in the dome. Dr. ir. H.C. Duyster designed a dome constructed with 822 hexagonal members, which together are forming the inner surface of the dome. In addition to the structural functions, it also provides an esthetical function on the ceiling of the exhibition hall, (Figure 4). During normal temperature circumstances, the ribs of the hexagons do not participate in the force distribution. However, during increasing temperatures, the compression will become larger within the plane of the dome and the plane wants to move laterally.

Figure 4: Interior of the Evoluon with three galeries and the hexagonal roof elements

When this happens, the ribs of the hexagons will be activated and prevent the dome from buckling. In between the hexagons, some reserved gaps are filled with concrete to create a rigid plane. In order to allow the upper and lower part of the dome to expand and shorten independently, the upper dome is placed freely on the lower dome, by rubber supports. During construction, each section of the lower part of the dome needed to be supported. The scaffolding was allowed to be removed, only after the cables in the upper and lower dome were tensioned and fixed. At the moment, Regus Nederland is renting the terrain of the Evoluon from Philips and runs a restaurant, a congress center and an event location. What the future will bring for the Evoluon is still unknown. Skywalk at the Grand Canyon Design of one of China's largest towers